Explore the amazing fishery that is the Lower Florida Keys in our brief guide to Big Pine Key fishing.

Whether you are a first-timer or a seasoned veteran, fishing the backcountry and flats of the LOWER FLORIDA KEYS is always a treat. Both FLY FISHING and SPIN FISHING are equally enjoyed. Most trips “out back” involve the use of both tactics to optimize the experience.

BIG PINE KEY is located just west of Seven Mile Bridge, an iconic landmark along the Florida Keys. Just far enough to escape the South Florida day trippers, you’re truly stepping back in time and entering what most consider to be the “Real Keys” experience. Time moves slower here and that is the way we like it!

That said, the fishing—as well as the flora and fauna— reflect the effects of less traffic. Less pressure, more habitat, more life!

There are plenty of species to target in our area to make a full 8-hours on the water seem like 5-minutes!

Though we set out to catch, the real reward is kicking back and taking in the beauty of the area.

Allowing a seasoned Florida waterman and all-encompassing devoted outdoorsman to show you around—is the only way! 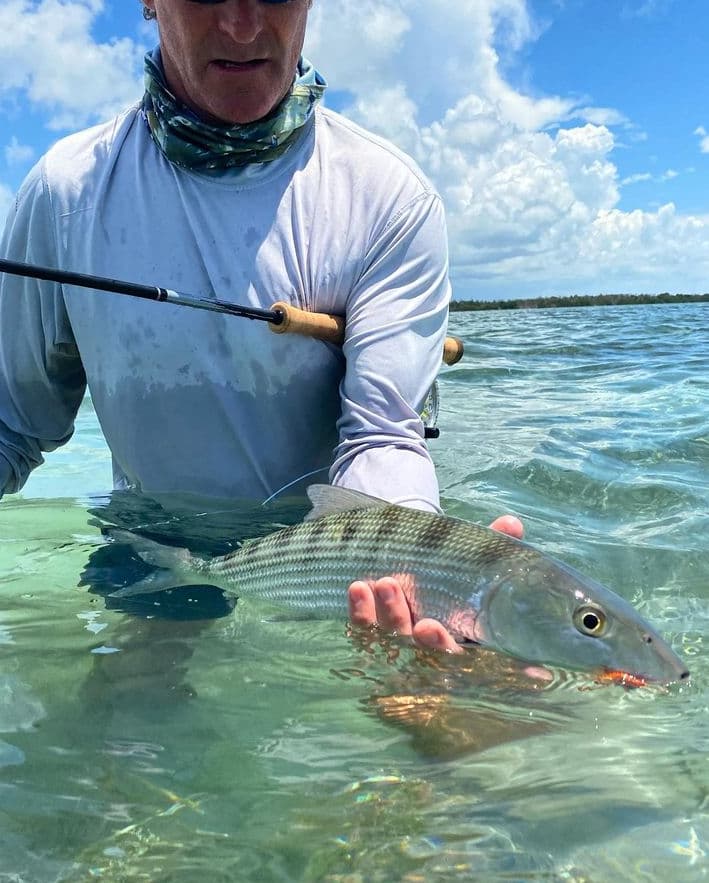 Along with everything, different times of the year boast better opportunities to accomplish goals for targeted species. The most sought-after times for booking are generally between March and June. This generally has to do with warming atmospheric trends (air temp., water temp., etc.). As the water temps climb and the threat of cold fronts dissipate, the fishing gets red hot!

Tarpon travel long distances to meet right in the heart of the Lower Keys both on the Oceanside and Gulf edges. This phenomenon generally starts to take place March/April timeframe and goes through June/July and generally peaks in May, around our version of a jubilee known as “Worm Hatch“. That said, there is a chance things can start sooner and go later, it all depends on weather volatility. There are also a great number of resident Tarpon that stick around the Lower Keys all year to play the game.

Permit are around most of the year and generally depart the flats for a spawn sometime between late March and start to return early May. They will make themselves more available to “eat a fly” in March and May, both in front of and on the back side of the spawn.

Bonefish can be found most everywhere once the weather has become a stable, warmer environment. Generally peaking in the summer months, we are targeting bonefish throughout the year.

During the winter months and around times most impacted by cold fronts, if there is a “good weather window” and the flats have a chance to warm up, we can see ferocious Bones looking to let their inhibitions down and get the drag screaming on fly or spin.

In short, we can have a great day of fishing regardless of the time of the year. The goal is to have fun, stay positive and enjoy the opportunity the see the flats from a Local’s point of view!

Getting Here and Staying Here

Key West airport is by far the best option for travel!

Though flying into Miami and renting a vehicle isn’t a horrible second. The drive along the Keys is highly recommended if you haven’t already done so.

For those who have, you’d most likely prefer option number one! You will find renting a vehicle over a ride-share option to best benefit your travel in the keys.

Accommodations in the Big Pine area are slim (which in turn keeps the volume off the water), however, there are many options between Duck Key and Key West for anglers to stay.

About a 45 minute commute sans traffic, which generally holds true to form at the early hours of the day. Parmers Resort and Little Palm Island are the closest. Vacation Rentals require 30+ day commitments in the Lower Keys area and are generally not the best route for shorter stays.

Dining in the area is sparse between Marathon and Key West but boasts some good options. To name a few…The Square Grouper, Kikis Sandbar, Boondocks, Broil Steak House. However, if you’re staying in the Marathon or Key West area, there is a plethora of options to choose from. If you’re opting to cook and prepare your own food, Parmers Resort has accommodations to facilitate.

Some of the best place to stay include:

There are quite a few guides  to choose from in the Lower Keys that will provide you with an “experience of a lifetime”. Those of us that live here work together, hang out and often even fish together to explore, and consistently learn, more about our ecosystem.

I implore everyone to seek a local, year-round resident of the Lower Keys to hire as your ambassador. We are the backbone, the working class and what makes the Keys so special. We are the stewards of our lands, waters and tribe!

Flats fishing in the Florida Keys offers a stellar variety of exciting, powerful sportfishing targets. Learn more about some of the fish species we target for anglers at  Fishing! 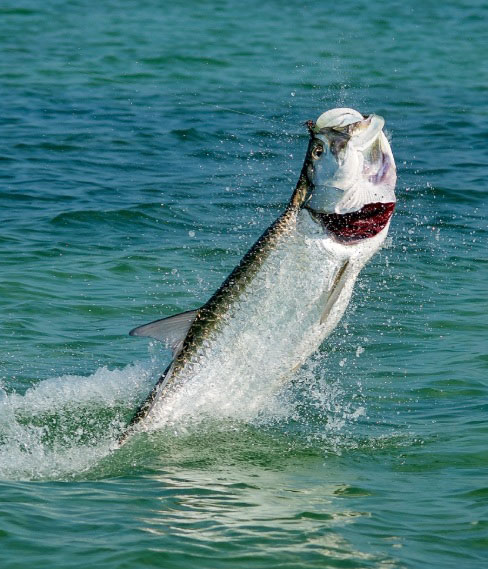 The Tarpon is one of the most sought-after fish in the fabulous Florida Keys. This powerful species offers the fight of a lifetime for any passionate angler! 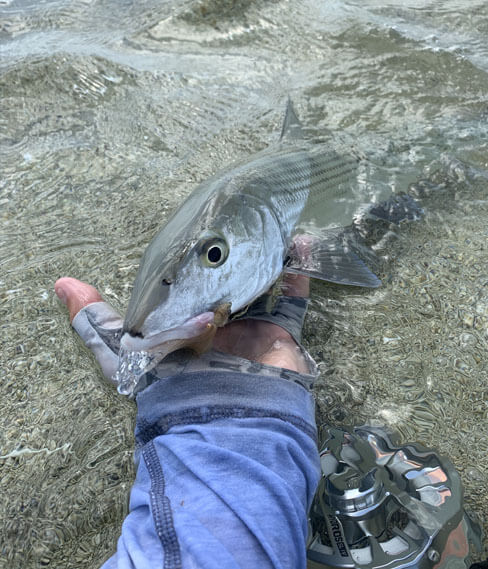 Commonly referred to as “ghosts”, the bonefish is one of the most elusive species on the flats in the Florida Keys. Knowing where and how to spot these secretive flats inhabitants makes the catch all the more worthwhile! 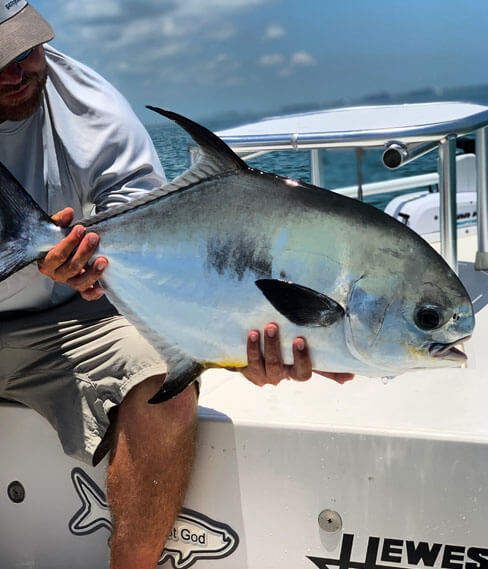 Permit are a game fish that are found both inshore and offshore, commonly feasting on crab, shrimp, and other small fish. 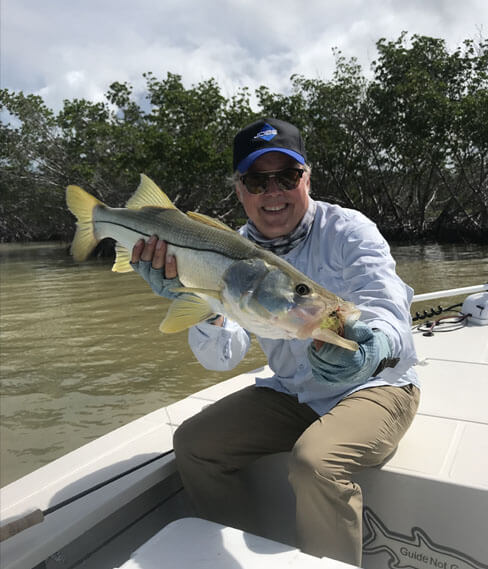 The Snook is an exciting back-country species. Let us show you the satisfaction of landing this Racing Mullet. 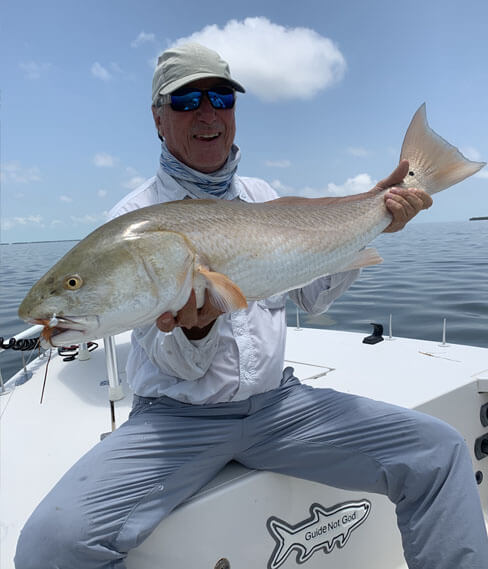 As elusive as they are powerful, the Redfish is a joy to track and catch on the flats of the Florida Keys. 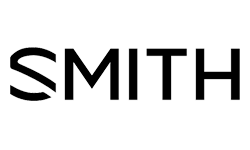 What our anglers are saying!

Brent Peterson
Had a great time. Justin is very knowledgeable and helpful. Will definitely do it again.

Kristen Peterson
Justin is a master of his craft! His passion for every aspect of backcountry fishing in combination with his tenacity for putting you on fish makes the entire experience really enjoyable. On top of that, he is super personable and really easy to get along with. Can't recommend him enough. If you're looking to fish in the lower keys, look no further than Hot Water Fishing.

Scott Douglas
My son and I had a great experience fishing the flats with Captain Justin. He knows how to find the fish and put you on them. We had a blast catching bonefish and tarpon on a beautiful day. No matter where you're staying in the Keys, it is worth the drive to Little Torch/Big Pine to fish with this first-class guide.

Jeff Brown
Justin coached me into my first few bone fish ever and it could not have been better. He talked me through the bite, take down and handling of the fish. I’ll be back for tarpon next.

wendi mahoney
We had a great time fishing with Justin. Very knowledgeable and he works very hard. He is equally at home with anglers new to the sport as he is with more experienced anglers. Highly recommended!

Andy Walker
I have had the great fortune of fly fishing around the world and I can honestly say that Captain Justin is as great a guide as I have fished with anywhere…he truly is a world class guide. Justin is extremely knowledgeable, he works very hard to give his clients a great experience, and he is wonderful to share a boat with. Fly fishing the Keys for tarpon is not easy and I was very lucky to have landed a 100lb fish (thank you Justin!)…but the fish was truly just a bonus. I would have scored Justin 5-stars even without the fish; it was just a fantastic experience.

Joseph Sorbara
Justin is one of the best fishing guides I have fished with, and I fish a lot with many Captains for many years. We had a great day together sight fishing and the day we fished with cloud cover he found a way to make the magic happen I look forward to my next trip. Thanks Justin.

Douglas Parker
My son and I had the pleasure of fishing with Justin for three days in the Everglades, primarily targeting big tarpon. It was one of the best fishing trips of my life and definitely my son’s favorite by far. Justin was by far the best guide I have fished with in all my trips. Not only did he bring the knowledge of the fishery, which is in itself a huge bonus given the size of the Everglades, but his passion and joy for putting us in a position to catch these beasts on the fly is unrivaled. We fished 12+ hour days in sometimes challenging conditions with Justin keeping us on fish with his skills. He is also a passionate steward of the fish and the whole ecosystem showing great respect for both. I would recommend Justin for both the “expert” fishers and the newbies out there trying to hook one of these truly amazing creatures. Thanks for an awesome trip and the lifetime of memories, Justin!

Greg Lankfer
Fishing with Justin was an absolute pleasure. Excellent equipment, really clean boat, very patient with our novice fishermen and got us on fish everyday no matter the conditions. I look forward to fishing with Justin again soon!!

Soflo_CROCi 47
Being on Justin’s boat is one of the best memories I will have in the keys for a very long time if not forever. For being on his skiff for 8 hours he had thought and showed me numerous tips I’ve never knew. And getting to see all the beautiful flats species that call the Florida keys home was a treat in itself, but to get up and personal with a push pole and hook them was an incredible experience. So if your looking to book a flats fly fishing charter, Justin will be able to handle your request with ease.👍🏼

Ready for some fun on the Flats?

Trust Hot Water Fishing for all of your Lower-Keys Back-Country Fishing Adventures!

Book your Charter today!
Learn more about our Charters